The Book of Exquisite Corpse
An emerging collection of stories and novels inspired by the surrealist word game, Exquisite Corpse. SUBSCRIBE to my free Deeply Weird newsletter to find out more! 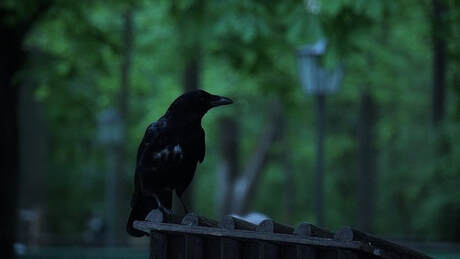 A crow barked twice. Surprised, I stared into the darkness at what might have been its beak, just a fleck of shine, before the bird flapped off noisily.
“How did you see that?”
Paul smiled. “I just recognised the sound. They’re always hopping in and out – they’re quite tame, some of them. Dale spends a lot of time in this garden…” He trailed off, his smile lost in doubt. Fair enough: it was inappropriate for him to say any more. Dale was his effectively his patient.
​     “I’ve heard they can use tools,” I said. It calmed me, just to consider this simple, easy fact. A completely non-life-and-death matter. Crows use tools. I took a deep, slow breath and let it out again, thinking only of that.
Paul nodded. “It’s true. Listen, I’m sorry your art company didn’t work out for you the way you wanted it to. But you can still try, find another way…”
I blinked at the sudden change of subject, but this was probably one of those counsellor things – to get the person to talk about their life as a whole and hopefully make the immediate problem seem less scary in context.
“Of course it won’t be quite how you envisioned, but you never know how things work out…” He looked at me, his expression gentle. “You had a real connection to those kids, too.”
“I know…” My mouth twisted guiltily.
“It’s a shame for you, too, I meant. These things have a way of opening us up.”
I turned on my seat to look at him. “What do you mean by that?” These big, sweeping always statements frustrated me – but I heard my demanding tone and blushed. I was getting too much into this ‘honest’ mode. We used to have these friendly meaning-of-life debates while the kids were running around the garden, but here, in the darkness and cold it felt utterly wrong.
“Sorry, I didn’t mean to sound so blunt,” I said quickly. “But I do want to understand: what did I open myself up to?” He wasn’t talking about his belief system, was he? Paul was well aware I didn’t share his, and he’d never pressed the matter. So far.
“Ah. I’ve missed you Elina, with all your questions.” He chuckled. “The psychologist is back!”
I bit my lip then laughed anyway. “God, it was only an A-level course,” I said, then felt bad about saying “God”.
“Life,” said Paul, nodding at me. I didn’t understand. Was he correcting my use of the word “God” to “life”? Was that the all-holy thing at the centre of it all?
Seeing my confusion he said, “We open ourselves up to life. This experience, on this plane.” He held out his hands to the garden.
Silently I asked, “What other plane might there be?” But this was religious stuff and you either bought into it or you didn’t. It wasn’t my territory… for now. I had enough on my plate. An immediate problem I needed to resolve right now.
Okay, so I didn’t believe everything he believed, but that didn’t mean I couldn’t enjoy his company and his problem solving skills. “So… Any ideas what I should do?”
“Stay here.” He spread his hands again.
I looked around me, at the wildflowers casting striped shadows over each other, the old, lopsided gravestones that I couldn’t see, but I knew were there, further back. What did he mean? Sleep on the bench? But – oh no. If he had a spare room I wasn’t going to take it. That was way too much of an imposition. Besides, I’d pass the virus on to him.
He watched me carefully. “I meant the church hall. It’s not ideal, but if you really want somewhere to stay and keep a social distance from absolutely everyone, I’ve just cancelled all events until July.”
I stared across at the white door which glowed dimly in the edge of the light. The church hall was where we’d held the kids’ art group; a modern, oblong extension to the church which looked a bit like an out-building.
“But… That’s really very generous of you, but… what would I sleep on?” Images of the interior quickened through my mind. The racks of chairs stacked along the wall. Of course, it had a kitchen area! It was small and practically antique, but still. I’d have to cut through to the church to get to the toilets… I couldn’t believe I was warming to the idea already, except for the one obvious thing lacking: a bed.
“Perhaps one of your flat mates could drop off your duvet amongst other things. You should be able to make up a bed using sofa cushions. I seem to remember from my early days roughing it as a young evangelist, if you stuff a few sports bags with enough clothes and line them up, they can be more comfortable than some of the worst mattresses in this world.”
I shivered with the delicious weirdness of it. Could this really be happening? Only ten minutes ago I was dizzy with the impossibility of my situation, not really believing there was a way out. The sports bag thing had to be hideously uncomfortable, no matter what he said (how bad could those hotel mattresses be?) but I didn’t care. A light had come on inside my head. A feeble but welcome light.
My mind was racing with so many details I hadn’t worked out what to say.
“Don’t answer me yet,” said Paul. “Speak to your friends. I’m sure they’ll help you make sense of it. But either way,” he added, standing up, “I'd like to think you already have what you came here for.”
“What’s that?” I stared back dumbly.
“A choice.”

Silence stung the phone line. I thought of all the internet lines and wireless phone lines that criss-crossed the air right now, a web of connections being tried and made, conversations going on. Possibly there were many at least as weird as this one.
Sarah repeated it back to me. “You’re moving in to the church hall.” She was piecing together the words, checking my logic for holes. I sensed she was also holding back a tide of shock and worry. I hadn’t given her time to react to the news of my likely infection before I threw this new development at her.
But despite the obvious danger posed to her by my staying at home, she wasn’t going to be hurried in to this new idea. “Won’t it be cold?”
“Um, there’s a heater I think.” Paul had already unlocked the door for me, but for some reason I couldn’t bring myself to go in and check these things. I had to stay there, it was the only viable choice.
“What about a cooker or hotplate?”
“There’s a whole kitchen in there, Sarah. It’s bigger than ours! True, it’s ancient. But they use it for events and stuff. Remember, I used to do the kids’ art group in there.” I had a stabbing urge to add, back when my life had a purpose. “If I’m using electricity I guess I’ll just have to pay him at the end.”
“The end? When is the end?” She half-whispered it to herself.
No way was she going to freak out. That was my job. I ignored the rhetorical question and brought her back to the issue at hand. “I’ll stay here until I’m clear of this thing. What is they say? Ten days after you’ve had symptoms? Fourteen? I’ll look it up. There’s no way I’m infecting you.”
“You might infect Paul,” she said quietly.
“I hope not.” I took a moment. “Actually, the chances are pretty low. He has no need to come in to the church hall. He’s already cancelled their events. I think he’s pre-empted the total lockdown that might happen across the whole country, soon enough.”
“It is happening, isn’t it?”
“I think so.”
Silence again. This wasn’t like us. In fact it was downright topsy-turvy. Sarah was leading on the doubtful silences. I’d rung her after I’d worked out a solution. But this was a different type of problem than usual. I wasn’t just feeling low for no apparent reason. There was nothing for her to psychoanalyse; she couldn’t even offer me a chocolate bonbon with a mug of tea.
It struck me that she might be busy in this silence, trying to find a reason I should come home.
“I’m not coming home.” There, I said it. “I have another option, and I’m going to take it.”
She laughed once. “I like this new decisive Elina.”
I felt a smile widen on my face but it was stopped by this horrible, creeping feeling underneath my skin.
“I don’t like… any of this. Sarah, I’m scared. I’ve probably got the coronavirus. And I don’t know what’s going on with my job. The systems, they’re not even set up remotely! Not the ones our team uses. Not the band four numpties. They’ll get rid of me!”
“They can’t just get rid of you…” Sarah’s sensible tone was back. I imagined her fisting her hip as she spoke.
“They might. They could make me redundant. If proper lockdown goes ahead, just imagine. Companies everywhere will be losing so much money.” I was pacing now, back and forth in front of the bench. I forced myself to stop. “At least… you’ll be okay, won’t you?” Sarah was a lab technician for a medical company.
“I think so… I don’t think we can do lockdown, not properly. We’d lose too many experiments. Besides, we wear so much protective equipment anyway that there’s no need to shut us down. I guess – all I have to is don my work gear before I get on the train!”
We laughed. How much I missed this feeling, already. I’d only been gone an hour or so. But everything had changed.
We went through the things she’d need to drop off for me: toothbrush, change of clothes (she could always drop more off in a day or so), duvet. My share of the pizza.
“It’ll be all right, you know,” she said. “Things’ll work out.”
Really? How did she know that? How could she be so confident? Or was she just being the counsellor again?
“Remind me, Sarah. Why didn’t you take psychology any further? You know you would’ve made a great counsellor. I’m being serious.”
She snorted, still playful. “Because I didn’t want to spend all my time talking to people about their problems – oh wait – look, here I am.”
“Oh ha ha...”
“Well, you know. With psychology I was looking for something a bit different, maybe something downright un-sensible before I settled down to a sensible degree in Chemistry.”
“And did you find it?”
“Well, I met you, didn’t I?”
I gasped in mock dismay. “Dr Sarah! That’s most unprofessional.”
“Yeah well, where else would I get my entertainment? And no, Matt’s quiz show obsession does not constitute entertainment. Thank God for my job…” Her tone changed and I could hear the frown in her voice. “Oh, sorry.”
“S’okay… So. Any other instructions, Dr Sarah?”
“Yes. Just – don’t spin out of control, okay? I’m asking you nicely.” She hesitated. “Or else I’ll get Matt on to you.”
I frowned. “What’s Matt gonna do? Quiz me to death?”
“Well that’s just the thing. You’re like the best puzzle ever. Every time I solve you, you go and mess yourself up all over again.”